Udgam is a non-profit organization founded by Marina as a platform to nurture and promote emerging artists in the field of Indian classical music. Its aim is to run workshops and stage four concerts every year, showcasing fledgeling talent as well as more established performers within the genre. The idea for the project emerged in its embryonic form many years ago during the early stages of Marinas performing career. As a young musician, she endured all the tribulations which are commonly shared by up-and-comers in any artistic pursuit; the difficulty in establishing a name, finding a performance space and gaining recognition for one's work. It was during this phase of her career that she asked herself how she could one day help ease the burden on other young artists pursuing the same journey.

The result is Ugdam. Founded in New York in 2008 with the help of Marinas students, in particular, Snehal and Vaishali, Ugdam has spent the subsequent years following through on its mission to promote Indian Classical music and afford talented young artists a platform to present their gifts to a wider audience. These young artists are usually showcased together with more well-known practitioners, in theatres as well as in the traditional baithak style, which brings the artist and the enthusiast together within an intimate setting. And in keeping with its ethos of supporting the artist, the organization also charges a nominal membership fee, which it divides up among the talent.

Since its inception, Ugdam has added chapters in Washington DC and Dhaka, with another one planned in Mumbai next year. The year 2012 also heralded the inaugural Ugdam Music Festival in Dhaka. Marinas ambitions for the project include the establishment of chapters in Chicago and Los Angeles, and the creation of an all-night concert to be held on an annual basis. Moreover, Ugdam aims to continue its efforts in promoting and celebrating Indian classical music in all its branches, in all its various stylistic forms, and in acting as a medium between the performers of the music and those who love it. 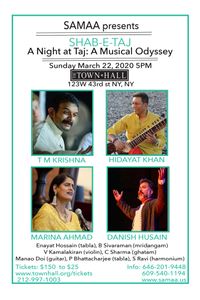 Love rises where the sun sets. The dome hides the dying embers of the day as Sultan Shahjahan and his Queen, always inseparable, rise from their graves to spend one final night together at their palace. What words will we hear whispered through the moonlit halls of their Taj Mahal? Will the lovers recount their memories? Will they hold each other silently and gaze into each other’s eyes until the eyes they see staring back at them have become their own? Or will they weep into each other’s arms — one final night in the face of ephemeral love?

In the legendary 1967 album, A Night At The Taj, Ustad Vilayat Khan and Ustad Imrat Khan answer this age-old question: What would we do if we had one more day with the person we love? Ustad Vilayat Khan voices Queen Mumtaz on his sitar and Ustad Imrat Khan replies as Shahjahan from the deep notes of his surbahar. The final conversation between the Sultan and his Queen comes to life as the dewdrops dry and the gift of timelessness fades with the rising sun.

Love has intrigued us since the dawn of time. From Helene to Eleanor, love has ravaged empires. Love has led armies to war and emperors to abandon throne. Love has inspired the Bhakti and Sufi movements, volumes of soul-stirring poetry, and an endless collection of passionate music. And love will continue to intrigue us. It only makes sense to extend the ethereal journey undertaken by the two late maestros and to continue to find the stories of love that mark our human condition. On this fateful night, we will explore love and its many prisms. We will capture the angles at which love reflects, refracts, and intersects. We will see the endless shapes of love reflected on the wall of a dimly lit cave. We will sing these shapes into existence. We will tell stories about these shapes through Dastangoi, the lost art of Urdu storytelling. We will listen in awe as TM Krishna, Hidayat Husain Khan, Danish Hussain and Marina Ahmad undertake the voyage across this limitless sea to bring us pearls to relish the supreme and eternal human condition. We will experience an evening of exhilarating musical renditions, jugalbandis interspersed with storytelling and conversations, and the intimate mehfil-baithak will give rise to a unique theatrical experience. Like A Night At The Taj, this will be a night to remember.

An Evening Of Classical And Sufi Music With Marina Ahmad

Marina Ahmad graces our stage with a mesmerising performance of classical and Sufi music Marina Ahmad was born in Dhaka, Bangladesh. During her time in Bangladesh she studied under the tutelage of respected musicians Ustad Phul Mohammed Khan and Shri Barin Majumdar Srimoti Ila Majumdar and then as a student at Dhaka Music College. Her pursuit of North Indian classical music ultimately took her to its birthplace and after a brief stint at the Gandharva Maha Vidyalaya in New Delhi, Marina was taken on by the internationally renowned Sangeet Martand Padma Bhibhushan Pandit Jasraj-ji, a master and luminary of the North Indian Classical music genre. 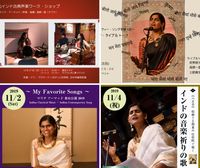 Marinaji's annual Japan tour from the 27th of October to the 4th of November where she collaborated with various artists from Japan. Here's a rundown of the tour:

27th of October – She facilitated a North India Vocal Workshop accompanied by Kazuto Sashihara on Tabla.

As a special guest, we welcomed singer Sally Sachi, who is an opera and jazz singer and pianist in recent years and has been actively involved in Indian music collaboration projects in India

During this session, you can get up close and spark a conversation with Marina Ahmad on her music and journey. Afterwhich, she will be accompanied by Tomoko Sano on keyboard, Kazuto Sashihara on tabla and Manao Doi on guitar for the music segment.

As a special guest, we will welcome Yusuke Tominaga, a singer-songwriter who has an established reputation for outstanding singing ability.

Mr Tominaga made a major debut in 2018 with “Silk Road Dear Mr Matsuhime” who sang the life of Matsuhime sleeping in Shinmatsu-in with a crystal high-tone voice and released three albums this year. 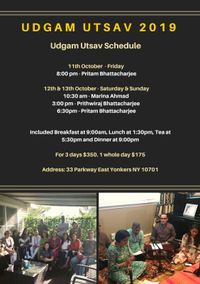 Udgam Utsav is arranged by students of Hindustani classical music , for anyone who wants to pick up this sacred form of music or have been a student of Hindustani Classical Music.

The 3 day long workshop is conducted in a group setting and is accessible for students at most levels of their musical journey.

We strive to truly pass on the essence of the ragas and the fundamentals of classical music.

Your teachers will be Marina Ahmad herself along with Prithiwiraj and Pritam Bhattacharjee.

Send us an email at udgammusicinfo@gmail.com to learn more! 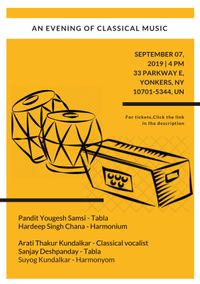 An Evening of Hindustani Classical Music 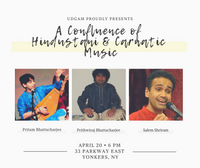 Udgam brings you another exciting concert where Carnatic music meets Hindustani music in one evening of celebration, harmony and melody.

Pritam Bhattacharjee is among the forefront of people who continue the teachings of Pandit Jasraj and the Mewati Gharana. He and his brother continue performing and teaching out of Atlanta, improving their art day by day.

Salem Shriram - Carnatic Vocal accompanied by the Violin and Mridangam

Salem Shriram is one of the bright prospects among the upcoming vocalists from Chennai. He is among the senior disciples of Sri. Calcutta K.S. Krishnamurti of the Carnatic discipline. 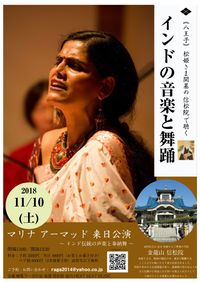 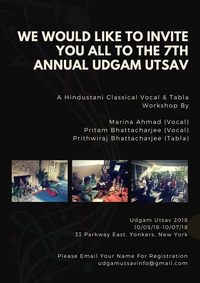 Send us an email at udgammusicinfo@gmail.com to learn more! 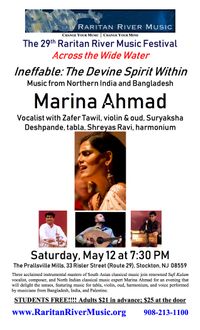 Ineffable: The Divine Spirit Within by Marina Ahmad 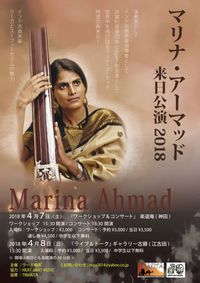 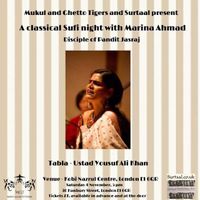 An Evening of Indian Classical and Sufi music 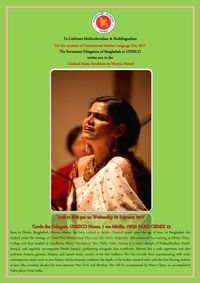 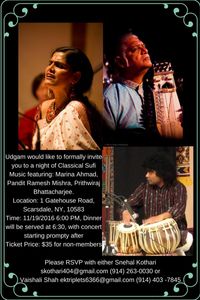 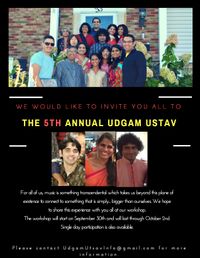 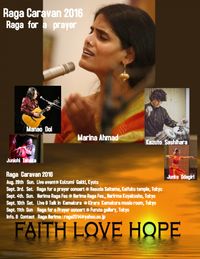 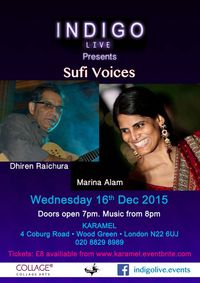 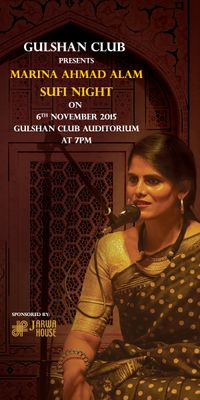